Avalon Quick Tip # 14 - How and Why an HOA Works
By: Community Associations Institute 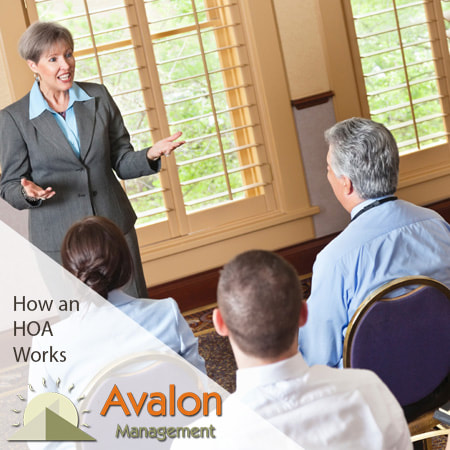 BENEFITING FROM COLLECTIVE MANAGEMENT Americans have largely accepted the collective management structure of common-interest communities. The private covenants and rules characteristic of associations are not novel in residential living. Similar restrictions often exist in rental apartment lease agreements and in zoning laws and building codes that govern traditional single-family, detached housing. In traditional housing, however, such restrictions are adopted and administered
by municipal governments rather than by the private governing boards composed of homeowners who are elected by their neighbors to lead their associations.

PRIVATIZING PUBLIC FUNCTIONS
Because of the fiscal challenges faced by many municipalities, housing developments often are approved with the stipulation that associations will assume many responsibilities that traditionally fall to local and state governments. These obligations can include road maintenance, snow removal, trash pickup and storm water management. This privatization of services allows municipalities to permit the continued development of needed housing without having to pay directly for that infrastructure through the tax base.

EXPANDING AFFORDABLE HOME OWNERSHIP
There has been a persistent effort to increase home ownership in America, especially in undeserved groups, such as minorities, women and immigrants, and in specific locations, such as urban areas. Almost from their inception in the 1960s, condominiums have tended to serve as lower-cost housing, especially for first-time buyers. This was especially true of early condominium conversions, in which apartment buildings were refurbished into condominiums. In today's economic climate, achieving affordability is a major challenge. Without the construction and operating efficiencies inherent in association development and operations, affordability would be an even greater problem.

MINIMIZING COSTS AND FOSTERING MARKET EFFICIENCIES
Community associations not only maintain home values but also reduce the need
for government oversight. Associations avoid the "tragedy of the commons" (where no one is responsible) through mandatory membership and collective management. They also circumvent the "free rider" issue (where not all beneficiaries pay their share) through mandatory assessments and agreements between the association and the homeowners. Put simply, community associations are an efficient means of providing services, assigning payment responsibility and being responsive to local concerns.

PROVIDING AMENITIES, OPPORTUNITIES AND OPTIONS
Associations offer a diverse variety of services and amenities, from golf courses and marinas to equestrian facilities and fitness centers. Very few Americans can afford such benefits without the shared responsibility enabled by common-interest communities. People who don't want to contend with gutters and yard work can purchase homes in communities where these responsibilities are taken on by the associations. There are age-restricted communities, pet-free and pet-friendly communities, even communities with airstrips. Community associations give people options, alternatives, facilities and resources they could not otherwise enjoy.

BUILDING A SENSE OF COMMUNITY
We are, for better and worse, a highly transient society. Americans follow professional opportunities and other preferences from state to state. By their inherent nature, community associations bring people together, strengthen neighborhood bonds and promote a sense of community and belonging-attributes that are often overlooked. A large percent- age of the more than 62 million Americans who make their homes in associations take advantage of association-sponsored activities like holiday events, social clubs, athletic and fitness activities, pool parties and more. These activities help residents get to know their neighbors and forge new, supportive friendships. Social opportunities exist even in smaller associations that don't have the resources or critical mass to sponsor formal activities. Many Americans make enduring friendships by serving on association boards and committees and volunteering in other ways.

DISPUTES AND CONFLICT. Community association critics often focus on issues that garner media attention, such as disputes over fences, bird feeders, landscaping, flagpoles, yard signs and similar issues. The reasons for the continued growth of associations-and the value and benefits of these homeowner-governed communities-are either ignored or misunderstood.

Of course, there are disputes in associations-between residents and their associations and among residents themselves-but they are relatively few in number and tangential to the actual operation and performance of community associations. In fact, the overwhelming majority of Americans who live in associations say they are satisfied with their communities.

The community association concept works-for municipalities, the U.S. housing market and the millions of Americans who choose to make their homes in common-interest communities.

This article was written by: